In June gartner published it’s Magic Quadrant for Application Infrastructure for Systematic SOA Infrastructure Projects. Due to the nature of SOA initiatives the selection of technologies and products aimed at supporting the implementation of the SOA infrastructure is done upfront. The resulting platform is shared among SOA applications and other integration initiatives in the enterprise.

To address the need for SOA infrastructure vendors typically have “SOA suites” of “SOA platforms”. These package products like: 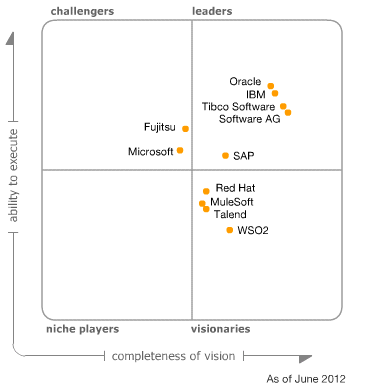 All open source vendors are in the visionary quadrant. In some cases their offerings are more modern than the Leaders’ products, since they are hardly burdened with backward compatibility issues. However these vendors are constrained by their small size or sometimes inconsistent execution.

Other recent Magic Quadrants for SOA and integration 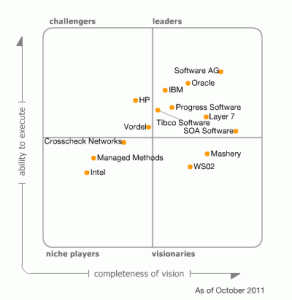 Clients today prefer to buy SOA governance solutions that will serve their purpose throughout the whole SOA endeavor, governing services and artifacts through different projects from planning and design all the way to implementation operation and retirement.

The most important change that I see at our customers compared with two year ago is that they more more interested and willing to invest in governance technologies.

What is SOA Governance about

SOA governance technology is about:

Oracle’s offering in the Governance technologies market is part of it’s Fusion Middleware product line. It includes the following products (see this this blog):

This number of products and the complexity of Oracle’s offering can make it hard to get a good grasp of what product will cater your specific needs. Should you need more insight visit our SOA governance seminar.

Most discussions on Cloud Computing I’ve been reading are focused on the infrastructure and technology part. It offers easy to deploy infrastructures or even applications in a very scalable way. All this in a pay-per-* way. And here is where a CFO should get interested. Moving to a Cloud implies moving from CAPEX to OPEX. Usually a CFO has an idea on how to keep these balanced. The Enterprise Architecture of some organizations even have very strict guidelines on whether certain expenses should the one or the other. So that’s the first one to thing about…

As was stated in a previous blogpost on measuring the business value of SOA, project metrics for business value created by SOA projects, IT projects, or even projects in general are rare. If I were a CFO this would worry me.
Besides that SOA efforts in a way also demand a different way of cost accounting than the traditional silo based. If my organizational unit owned (and had to account for the costs) of a rather popular often reused service, I would like to charge them. Say for example in a pay-per-service-call way. How do the financial systems under the responsibility of the CFO facilitate this?

Of course there will be lots of other stuff on your agenda if you are the CFO. But hey due to the crisis interest rates are low, labor is cheap, as are materials, so why not invest now in the foundation/infrastructure for the future 😉
If you’re a CFO and – by incident – are reading this blogpost please let me know what you think, and add a comment…

In order to have a good assessment of these we need a solid baseline measurement. This is where it gets hard. How many organizations actually have baselines like these. So the intricacies of measuring the business value of SOA aren’t necessarily related to SOA! It might very well be an issue for IT or even businesses in general.

What is specific for SOA or any other architecture or maybe project management approach, is to single out SOA as the direct responsible mechanism for the business value created (causality). In other words what part is SOA specific and what is “just” the availability of a new application? SOA has an indirect impact on business outcomes.
As an example of the previous point: In one of the SOA efforts that I have been involved in – that was at least in my opinion successful – the realization of the business case was very clear: 5 to 10 employees of a department had no longer work to do after 11.00 am. However because we automated a process that wasn’t automated before, it would be very hard for me to point out what part of the savings was actually directly caused by implementing in an SOA context.

This is one of the reasons why I’ve been advising organizations to implement SOA as part of their “normal” projects, or at least projects with a valid business case. Dealing with your project in a SOA way will not only deliver the monetary outcome described in the business case. Applying SOA principles like “Separation of concerns” and “Loose Coupling” will yield in solutions that are modular, interoperable, and shareable. 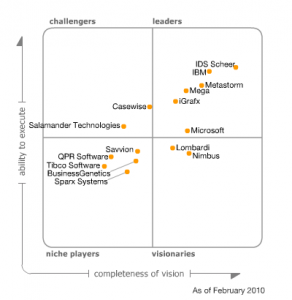 Few days ago Gartner published it’s Magic Quadrant for Business Process Analysis tools. ARIS is one of the most comprehensive enterprise and BP architecture toolsets on the market, with strong support for a wide variety of standards, methods and frameworks.

IDS Scheer OEMed ARIS to both SAP and Oracle. Oracle and SAP use ARIS as the EA and BPA modeling tool. This will probably be continued even now that Software AG has acquired IDS Scheer. This acquisition can introduce a period of organization and product integration. Gartner suggests that customers monitor the situation.

Earlier IDS Scheer has released ARIS Express, as free BPM software product to the market. Gartner sees the Express product as a lightweight BPA product for low maturity or occasional use. It can be used for commercial use and has an upgrade path to ARIS professional products. A great product for anyone starting on the BPM track.

Gartner has taken a look into the recently released Fusion Middleware 11g R1. They see Oracle refining and reasserting its middleware strategy with this release. The nuance has also been brought in this blog before:

The stated objective for OFM 11g is to be “complete, integrated, hot-pluggable, best-of-breed,” all of which are achieved in OFM 11g to a degree, although each will require additional investment from Oracle over time.

To customers it is important to notice that OFM 11g is the foundation for Oracle Fusion Applications (OFA), Oracle’s next generation of packaged business applications. This leverages the need to create an excellent product for Oracle, because it has to eat it’s own dog food here. One can expect that Oracle will continue investing in this set of products.
The only uncertainty is to what extent the acquisition of Sun Microsystems will impact the large range of products in OFM. This introduces some challenges, resulting in changes in some of the OFM products (no severe cases expected here).

iPod for the enterprise

Oracle refers to a strategy like the recently introduced “database machine” as the iPod for the enterprise. First product in this range is a highly optimized database appliance, with pre-installed, pre-configured RDBMS in a hardware arrangement, including processing and storage capabilities.
This is a new direction for Oracle. With the Sun acquisition Oracle is no longer dependent on partners for the technology, knowledge, skills and hardware. It is expected that a middleware appliance will be available within a year. Here the Sun statement “software is free” could be turned to “hardware is free”. Oracle afterall stays a software company and could provide hardware for their customers convenience.