Within a week from the launch of FMW 11g I was able to to get a good first impression of this milestone release. We attended the SOA Suite Foundation training that was lead by Oracle PTS. Basically this leads you through the OrderBooking order demo / tutorial. This gives a good impression of the foundations and possibilities of SOA Suite 11g. 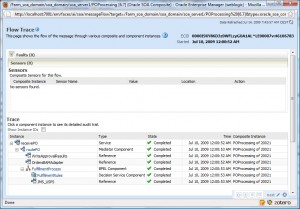 One of the key marketing terms for FMW 11g release is integrated. And indeed Oracle has made a great step in integrating SOA Suite components, as well as integrating SOA Suite with Weblogic server and it’s (monitoring) tools. However note that even if in the licensing Oracle Service Bus is in the package… It is still a separate product in this release. OSB is a sparate download and has to be installed next to the SOA Suite. Off course since it’s BEA background it has integration with Weblogic.

Part of the great stuff can be seen in the screenshot. It shows the flow through the composite application. After the message is received, it is routed by Mediator (former ESB). Which does it’s magic and sends it to two adapters ( in this case a file and a BAM adapter), and a BPEL process. The BPEL process in turn calls a decision service as implemented with Oracle Rules, and a JMS adapter.

This one common console to view status of both BPEL and Mediator (formerly known as ESB) is a great enhancement. A so called ecid (a global ID ) is used for this end to end tracking. This has really been brought to the next level. However I was a little disapointed that OSB has not been integrated (yet, as we were told) in the integral monitoring using ecid’s. 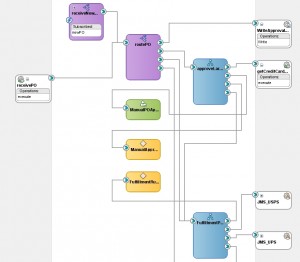 Please note that a composite applications, don’t have to be a SOA applications. Using all kinds of adapters in a composite looks great… and from an architectural perspective it could be argued that it is wise to only allow (web) service adapters to the Service Bus (that could be implemented with OSB).

This year Oracle organized their first OTN Virtual Developer Day . A virtual hands-on training in Java and Rich Enterprise Applications. The screencasts and “Hands-On Labs” are still available. The latter require an AWS (Amazon Web Services) account and charges can apply. The following sessions are interesting from an Application Server point of view:

This session provides an overview of Oracle WebLogic Server concepts, and discusses the road map for the Oracle Fusion Middleware Application Server infrastructure, explaining Oracle’s current offerings post-BEA-acquisition and where the product is headed. The screencast can be viewed: Part 1 Part 2
or downloaded:

This session highlights the top 10 capabilities that will improve a Java developers working on WebLogic Server include features such as deep Spring framework integration and support, fast Java class swapping, deployment plans, HTTP pub-sub capabilities for Web 2.0 development, sophisticated debugging and end-to-end updates for Java EE 5.0 development. Learn what’s new and see it in action in this demonstration centric session. View the screencast: Part 1 Part 2
or download it:

Not to long ago Oracle tried to acquire MySQL, and Sun got away with the prize. Few years earlier, actually in 2005, Oracle acquired InnoDB. This was seen as an effort to lower the valuation of MySQL by removing one of it´s primary storage engines. Which (under the assumption that the valuation of Sun wasn´t raised to much after they got MySQL) succeeded in the end, since they got MySQL in the package.
Anyway for MySQL adapts the good news is that MySQL probably will stay open source according to a founding developer of WordPress.

As with any merger a lot of questions will be raised that can be answered in the following months (or years). Will Oracle continue with multiple JVMs? Both acquisition of BEA and Sun brought one into the company.
Same goes for application servers… Oracle had one, bought one with BEA, and one with Sun. Oracle favored WebLogic over OC4J. But will Glassfish remain in the portfolio?

However most worrying point for Oracle´s customers will be how this will effect release dates of (long) promised features, and bug fixes. Just like the integration effort after the acquisition of BEA is doing right now…

And what has MS got to do with it…

Did I already mention that Oracle now has also acquired Open Office. This means that these two rivals have created a new field to play the battle of giants.

Update June 8th, 2009 Sun´s special stockholder meeting to vote on the adoption of the merger agreement is scheduled for July 16, 2009.