Just finished reading Hatching Twitter: A True Story of Money, Power, Friendship, and Betrayal and I must say that I wasn’t as impressed as when reading for example The Everything Store. The book is more about politics and opportunities than about creating opportunities and value or generating great ideas that others can build on. Of course this can still offer a great story and be a good read, however it isn’t the thing I was looking for when picking up the book.

The two business lessons in Hatching Twitter: A true story of …

OK, I took two lessons from the book: The anecdote on the first starts when Evan Williams has the first appointment with his business coach. Evan asked his first question: “What’s the worst thing I can do as CEO to fuck the company up?”

Without skipping a beat, Campbell responded: “Hire your fucking friends!” He went into a ten-minute tirade about friends and business and how they don’t mix.

Which was actually what Evan was doing at the time and kept doing.

Fake it until you make it

The second lessons boils down to “fake it until you make it”. To book quite extensively elaborates on how Jack Dorsey wasn’t just looking at Steve Jobs with admiration; he was emulating him. In public talks and news interviews Jack continued to channel Steve Jobs, using terms like “magical” and “delightful” and “surprising” and “best” to describe products, along with almost exact vernacular used by Steve Jobs at conferences and on television, including “we’re just humans running this company” and hawking the concept that Jobs shared, when he told people he was “most proud” of the things the company hadn’t done. That is how the world got to see Jack Dorsey as the new Steve Jobs. Which helped Jack advance in his plans to get back to Twitter and on with his career.

…and some parenting advice…

In one of the latest chapters when looking into the life of Evan Williams and his wife Sara there somehow pops up some parenting advice. It kind of surprised me from a founder of twitter:

…like Evan, Miles (his son) is shy and sometimes socially awkward. As much as they want to change that in him, they know they can’t. But they also know that technology won’t change that either, so the kids are strictly forbidden to use iPads, iPhones, or televisions. Human interactions are encouraged. So are physical, paper books. 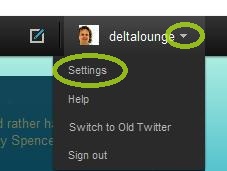 There is a growing number of Twitter Apps that trick you into giving them access to your account and so enabling them to send spam on your behalf. Should you (like me at least once) fall for this trap, here is an easy way to prevent further damage. Use the following url: http://twitter.com/settings/connections or click the links that are highlighted in the screen shot on the right to manage your Twitter connections.

After that you just click Revoke Access below the Application that is using your account to spam others. An example is depicted in the screen shot below (for a non spamming App): 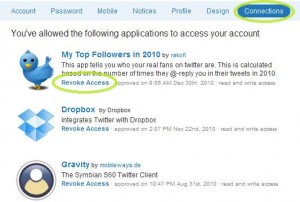