Last week we started a series of blog posts we show you how we use “web scale” patterns to achieve scalability and flexibility in our back office software. Last week’s pattern we discussed was CQRS. This week we will dive into Event Sourcing. Showing you how this doesn’t just solve a technical problem, they help us solve our business problems!

The idea of Event Sourcing is that every change to the state of a system is captured in sequence and that these events can be used to determine the current state. Consequently, the state of the system for any point in time can be determined by replaying the events. The structure of the service changes from storing state to storing events.

The most obvious that we gain by using Event Sourcing is that we have a log of all the changes. We can see everything that happened. This enables us to:

Using Event Sourcing can feel a little bit awkward for some developers. However, it offers a variety of opportunities. One could replay the events on a test environment to see exactly what happened on pro, while you have the ability to stop, rewind and replay the events running a debugger. This provides also a way to do parallel testing before promoting an upgrade to production.

Where do we use it at bol.com? 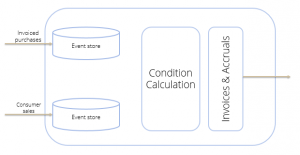 One of the examples where we use Event Sourcing is Condition Management and especially the calculations of accruals and invoices for (purchasing) conditions. A large set of our purchasing conditions is based on either purchasing amounts or values and sales amounts and values. In general these purchasing conditions have to attributed to (sets of) single products, product categories, suppliers and brands.

With the Event Sourcing model, we are also more loosely coupled to the source services for purchasing and sales. Our calculations can handle events that are captured out of sequence or even very late. Condition values are still calculated properly and handled as accounting and controlling have prescribed.
For the future, we are planning to implement scenario run through and comparisons. This would support our buyers while negotiating with suppliers.

Next in web scale patterns in the bol.com back office

In the next week’s episodes on the following subjects will be published:

On Monday October 12th Rob de Groot and Chris Kramer of the bol.com test automation team and development process innovation team will present on performance testing at bol.com. The presentation is for the Dutch Web Performance & Operations Meetup, as a pre-event for the WebPerfDays.

Rob and Chris will elaborate on how performance testing evolved at bol.com and show how modern tooling like Docker and Mayfly fits into the future of performance testing? Mayfly is the user story centric Continuous Delivery development platform, developed by bol.com.

The event will be hosted at bol.com headquarters in Utrecht (map).

Virtual Machines are a great way to test stuff or use valuable tools in a separate environment. Think of test driving an OS, like Ubuntu 12.04 or Windows 8. Other examples include using pre-build appliances to use Oracle SOA Suite and BPM or WebLogic Server and Java tools.

These Virtual Machines can be quite demanding for resources on your PC or laptop. Fortunately there are ways to speed up VirtualBox appliances. Besides increasing the allocated CPU power and RAM there are a few less expected things you can do: 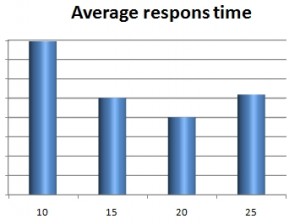