One of the leading portals on BigData, Dataconomy, had an interview with a colleague of mine on product recommendations systems. These are systems aimed towards personalizing content and recommending the ‘right’ products, in other words products that inspire customers. The article – The Science Behind the Finding the Perfect Product – is a nice read that covers quite some areas.

At bol.com we use Hadoop for batches, and we have our own custom-built technology for the real-time part. The picture with this blog post shows some of the new nodes that were added to the Hadoop cluster yust this week.

This colleague also held a talk at BerlinBuzz 2014 on product recommendations. It covers quite some interesting stuff on a great case of the use of Hadoop and BigData in under 20 minutes:

Amazon’s best sold laptop runs Linux! And I must admit that I was surprised to discover this today. It has been the for almost three months today. 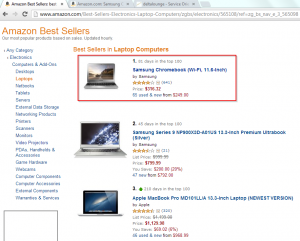 Think about how you are using your laptop most of the time: If you spend 90% of your time using the web the Chromebook might be something for you. Especially if you are using software-as-a-service or Web apps most of the time. On the other hand if you need special programs that require Windows or OSX this probably won’t work for you. Right now you might want to check ZDnet’s review of the Samsung Chromebook.

Recently I read an extensive blogpost by Frans van Buul on Spring and Java EE. As he points out there are some false arguments in favor of the Spring Framework. It is stated that:

Many of the arguments that have traditionally been brought forward in favor of Spring are invalid or outdated, because they target disadvantages of J2EE 1.4 and prior versions, rather than Java EE 5/6. … the original argument that this is not supported by Java EE is simply gone, and the remaining argument, if present, is much weaker.

If you’re in a position where evaluating these alternatives read the entire blogpost. Generally speaking there is no best way to go. Both are viable frameworks for writing Java applications.

The choice should be made by taking into account the particular requirements and technology strategy of the organizations building and using the application.

If there’s an opportunity we’ll see if we can come up with some rules of thumb for the selection.

From the time the news that Oracle was going to acquire Sun there has been much debate on what this would mean for MySQL. Today Edward Screven, Oracle’s chief corporate architect, revealed the future of MySQL in a keynote at The O’Reilly MySQL Conference & Expo 2010. The simple message was:

Prior to this keynote mister Screven told Reuters:

We are increasing our investment in MySQL… on every front.

Oracle is already the biggest player in the database market. With Microsoft’s SQL Server as the target for MySQL, Oracle believes it can boost it’s sales. From this perspective MySQL gives Oracle an entry to other parts of the market. While on an other aspect Oracle has improve the relation with Microsoft, since it’s Operating System Windows is the number-one destination for MySQL downloads! While Linux is the number-one OS for deployments.

InfoWorld also had an interview with Edward Screven before the keynote. Here are some quotes from the InfoWorld interview:

MySQL has some properties that Oracle does not,It’s small, it’s easy to install. It’s easy for developers to get going with it.

And on the open source community edition:

I don’t see foresee any substantial changes from how MySQL AB or Sun made the distinction [between what was in the community and commercial editions]. I expect that core features will end up in community edition. There will be some value-add, like monitoring or backup, that make sense in the enterprise edition.

It would be a mistake for us to starve the community edition because that would impinge upon the ubiquity of MySQL.

The MySQL community now includes several forks of the MySQL core tool like MariaDB and Drizzle. Both produced by ex-MySQL employees. These are experimenting with different data storage engines and other enhancements.

I think it will be hard for those guys to create a forked product with the kind of commercial support that our customers need for production applications. We’re really focused on ensuring that MySQL becomes a better product and appeals to our customers. What we’re fundamentally selling here is support.

Few days ago a colleague published an interesting blogpost on jBPM, JPA, and Hibernate. The post was noticed by Tom Baeyens, who until late March 2010 was the project lead for jBPM at JBoss.
Of course JBoss restates their commitment to advancing the jBPM project, but it will be very interesting to see what will come from Tom Baeyens’s new initiative…

Although there was already a sample code page on Oracle’s Technet. There probably were more… Oracle has created a Sample Code Repository. Like any repository this one should centralize and consolidate the large pile of samples that is available, both from Oracle product specialist, consultant, partners and customers.

Actually this could make it easier to find samples. To make this a success, there has to be a spirit of reuse. And as the major part of developers and architects out there can testify that’s not always easy part. It boils down to the same willingness for reuse of code that is required for a successful long term Service Oriented approach of software development within an organization.
Anyway some good examples are already available. A good introduction on samplecode at Oracle Technet can be found in this podcast (m4v) that features Duncan Mills. By the way, more podcasts can be found on the techcast page.

Google Code Search is not exactly new, but it caught my attention because of some blogpost and comments I saw this week. To give it a try I did some queries with it and have mixed feelings so far. Asking around co-workers did not raise and enthusiastic crowd. Leaving me with the question whether any of you out there uses Google Code Search on a regular basis? And, do you have any examples for what kind of queries this works for you?
Thanks in advance for your comments.

Working as a consultant for multiple customers, I get to work with a lot of different desktops, besides my laptop. This used to result in installing the same software again and again on different machines, and keeping it up to date. I found an alternative in PortableApps. 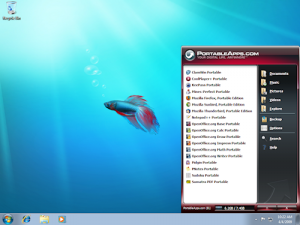 PortableApps.com is an open platform that works from any USB flash drive, iPod, memory card, or portable hard drive. It’s open source, it´s free and it´s convenient. Now I can carry a great bundle of applications and utilities on a simple USB stick (OK, I admit to use an USB hard drive). This allows me to work with the same tools everywhere without additional cost, or the need to install software.

These are the applications and utilities I favor from the collection:

The complete set of applications can be found here.

When I started using Portable Apps it was installed on the first available USB stick. Which turned out to have a USB 1.1 controller. That was replaced very quickly with one that supported USB 2.0. This device was a few months later replaced by a USB hard drive. Both because of capacity and speed considerations. Now the external hard drive is the primary device and the (network) storage of the PCs serves as back up.
Portable Apps works on any Windows computer.Using Ubuntu you can use Wine to run it.