The World Economic Forum (WEF) published its Global Competitiveness Report, a comprehensive assessment of economic competitiveness across the globe. Each country’s relative economic strength is determined by analysing twelve pillars–including the capacity to innovate, infrastructure, and health factors. The top five is:

These results shouldn’t be a surpise if you are familiar with Global Innovation Index 2015 (GII), Digital Economy and Society Index (DESI) 2015 or for example the Bloomberg Innovation Index

Over at Quartz they created an interesting interactive graphic based om the Global Competitiveness Report 2015-2016. Very illustrative although they restricted the factors to these seven: 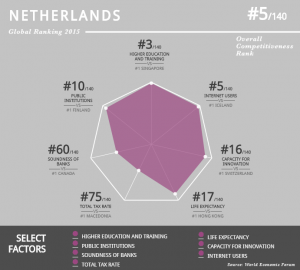 The Wall Street Journal and Dow Jones VentureSource are tracking venture-backed private companies valued at $1 billion or more. This group of companies is called the billion dollar club.

The infographic created by the WSJ can be used to track how the membership of this club evolves and what the valuation of these companies individual and as a group is. In line with the findings in the Digital Evolution Index there is a limited number of European companies in the club and their number and valuation aren’t growing as fast as Asia and USA ones.

In January 2014 only 2 of the 42 companies in the billion dollar club are from Europe. In September 2015 just 10 of the 118 are European based companies. Here is the list of billion dollar startups in Europe:

Rocket Internet and Zalando exited the list in October 2014 because of their IPOs. All are located in the countries with the best internet infrastructure: United Kingdom (London), Sweden, Germany, The Netherlands, Luxembourg and France.

Besides WSJ and Dow Jones VentureSource TechCrunch also curates a list of Unicorns. A Unicorn being a private company with a post-money valuations of $1 billion or more. The TechCrunch Unicorn Leaderboard features one European company that isn’t listed at the WSJ’s list: Auto1 Group from Berlin, Germany.

The picture in both leader boards is the same: there is a relative low number of billion dollar European startups. It is the same in the emerging Unicorns list.

Does Europe fall behind?

Looking at both the WSJ and TechCrunch list of unicorns and the findings in the Digital Evolution Index it certainly looks like Europe is falling behind. If the EU wouldn’t agree why would they have bothered to start a digital agenda (a Europe 2020 initiative)?

Thomas Petersen has written Why is Europe failing to create more unicorns? Mainly stating that there is no true single European market, the EU doesn’t make it better for entrepreneurs (yet worse because of legislation and political sub optimisations), and there is geolocation where both money and technical knowledge gravitate to.

Besides those, there is a reason that al European unicorns are situated in the countries with the best internet infrastructure. Larger parts of Europe aren’t in that position yet.
Some of the European countries with unicorns are in the stall out group in the DESI index. Meaning that measures should be taken to get their momentum back because they run the risk of falling behind.
Again Europe should work really hard on creating a true single digital European market. Reducing the number of laws and trade barriers is key.

The data presented by Digital Evolution Index seems supported by data from the European Commission. The EU defined a Digital Economy and Society Index to support and measure progress on the digital agenda for Europe:

The Digital Economy and Society Index (DESI) is a composite index that summarises relevant indicators on Europe’s digital performance and tracks the evolution of EU member states in digital competitiveness.

The Digital Economy and Society Index (DESI) is based on five dimensions:

Both the Digital Evolution Index and the Digital Economy and Society Index show the same countries as leaders in the digital market in Europe.

Denmark, Sweden, The Netherlands and Finland are the highest performing countries. They are not only ahead in the EU, but they are world leaders in digital.

The Digital Economy and Society Index improved from 2014 to 2015: 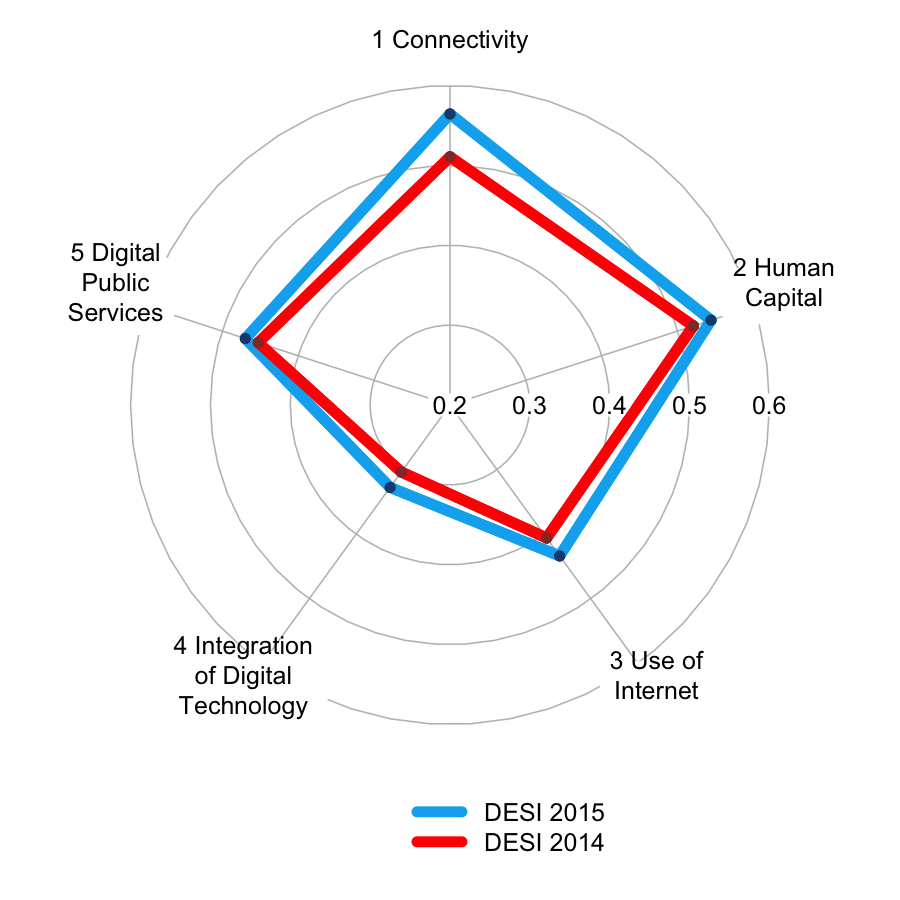 Keep in mind that there is no benchmark to non-European countries! Besides that it is remarkable that all countries improved. Also the Digital Evolution Index didn’t show progress for the highest performing countries. I think there’s a little too much optimism here.

The Digital Economy and Society Index has a more optimistic outlook for the digital economy in Europe compare to what the Digital Evolution Index shows us. However both support the case for a digital agenda for Europe in 2020.

Nevertheless the Washington Post showed in June Europe has an acute need for harmonisation. The article states that it’s easier for Europeans to buy and sell online with non-member countries, especially the United States, which accounts for more than half of all the EU’s digital business. Which is rather unexpected for a union. So there is a lot to do for Europe if the leading countries want to keep playing at the world top level and for the other countries not to fall to far behind.

From that perspective it is remarkable that there seems to be little focus on harmonising laws and bringing down barriers for digital trade in the Digital Single Market initiative. 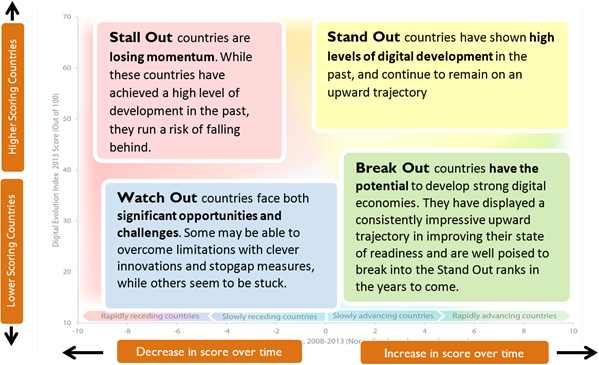 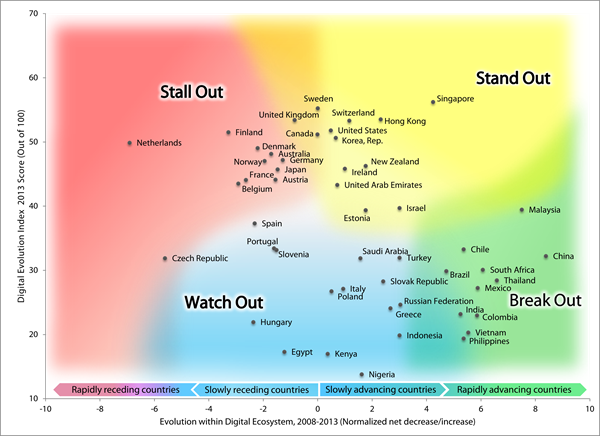 You might have read here or on other blogs that SOA isn’t a purpose. It is a means to an end. The same goes for all the technologies that we use when implementing a SOA, or an architecture, or an application in general. So I wanted to share the next video with you since I think that it – in an even broader perspective – shows this point. Technology itself is not good or bad. It all boils down to how we as people use it.