By default the Oracle BPM engine (Business Process Management) is configured so it won’t publish events to BAM (Business Activity Management). So should you choose to use BAM and use these great dashboards, you have set the DisableActions property to false/empty. Here is how it works to configure BPM to BAM:

To have the BPM server push events to BAM – Business Activity Monitoring – we have to configure the BPM suite to use the BAM Adapter. The BAM Adapter is configured (like other SOA Suite and BPM Adapters) in the WebLogic Server Console.

In Oracle SOA Suite 10g, or more specific BPEL 10g, one could group functionality in domains. This feature has been away in the early versions of SOA Suite 11g. They have returned in more recent version and can be used for all SCA composites (instead of BPEL only). Nowadays these 10g domains are called partitions.

While deploying SCA appications from JDeveloper or ANT you should add the partition from now on.

To create Oracle BPM processess with JDeveloper you need to install the BPM Studio extension. This is similar to installing the SOA Suite extension.

Ensure that the desired version of JDeveloper is installed. You can download JDeveloper here. Should you be unsure on how to install JDeveloper check the SOA Suite quick start guide to guide you.

Install JDeveloper in a seperate Middleware Home. When starting JDeveloper choose the “Default” role. To enable JDeveloper to perform development for the SOA Suite and develop and deploy SCA composites you have to install an extension called SOA Composite Editor. When you want to develop BPM processess you need to install BPM Studio extension following these steps: 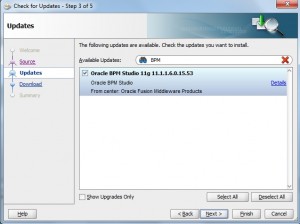 Installing PS5 (11.1.1.6) can cause some problems when using Oracle XE as the infrastucture database. The solution is described in this SOA Suite / BPM blog by Niall Commiskey.

My colleague Laurens van der Starre published a serie of tips and tricks on upgrading Oracle Fusion Middleware to PS5 on the Whitehorses blog.

There is an additional article on upgrading to OFM 11.1.1.6 on the Whitehorses blog. It goes into more detail on JDK 7 support, OWSM in SOA Suite, the combination of OSB en OWSM and for example the PSA (Patch Set Assistant) performance.

While trying to keep my post on purging the BPEL and ESB/Mediator database up to date with the latest documents and experiences, I found these whitepapers and references:

An Oracle SOA 11G installation presents a few challenges for administrators and one of these is managing the growth of the SOA database. The advice facilitates better dialog between SOA and Database administrators when planning and managing database requirements.

This document covers everything you need to know about the SOA Infrastructure Database for Oracle SOA Suite 11g. Here we bring together content from sources such as OTN, Product Documentation and our Knowledge Base in an effort to provide you with a single comprehensive resource.

All details on download and importing the appliance can be found on the VirtualBox instructions page. No need to say that the appliance has been released for development and testing purposes.

Oracle WebLogic Server 12c (12.1.1) is available for download. The main themes of the new release are according to Oracle:

Shortly after WLS 12c Oracle also has released OEPE 12.1.1 – Oracle Enterprise Pack for Eclipse. It is certified on Windows 7/XP/Vista, MacOS, and Linux. OEPE is supported on JDK 6.

With OTN Virtual Developer Day a WebLogic 12c VirtualBox appliance became available. On the appliance there are Labs and other Java development tools like: Hudson, Subversion, Maven, NetBeans IDE, and Eclipse (including OEPE).

After installing Oracle Enterprise Repository (OER) we experience some memory issues. Besides the messages in the log files, we also couldn’t use the console and em as we did before (when we were just running SOA Suite). It turned out the installation of OER in the same Weblogic domain resulted in some unexpected things.

After the installation of OER the setDomainEnv not only calls the setSOADomainEnv. It also calls a script that sets the USER_MEM_ARGS for the oer_server in the domain. Apparently the memory required for OER is less than needed for the SOA Suite. Since the script for OER is executed last, memory setting remain low. As shown in the smippet taken from the setDomainEnv.cmd:

To solve the memory issue when starting the WebLogic Server using the startWebLogic script we alter the sequence so the setOERDomainEnv.cmd goes before the setSOADomainEnv.cmd.