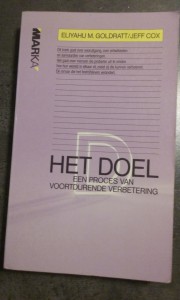 Think it was back in 1993 I first read The Goal by Eliyahu Moshe Goldratt. The book was one of the first and most notable in the genre of business novels. The book – The Goal – introduces the theory of constraints (TOC) process for improving organisations. The book is set in a manufacturing company. However the book provides the context for a more generic approach to continuous improvement.

The theory of constraints boils down to:

A chain is as strong as its weakest link.

In general the throughput is seen as the movement of inputs and outputs through a production process. Bottomline it can described as the rate at which a system generates its products or services per unit of time.

In the theory of constraints throughput is the rate at which a system achieves its goal. Mostly this is a monetary revenue and not the items or volume created to be sold or kept as inventory. 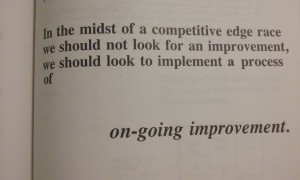 As said before the theory of constraints offers an approach for continuous improvement. Optimising the utilisation of the constraint is an important part of the process. Of course this could lead to the discovery that another resource became the constraint. So we continu the optimisation.

As Goldratt states in The Race:

In the midst of a competitive race we should not look for an improvement, we should look to implement a process of on-going improvement.

The Phoenix Project borrows both content and genre from The Goal. It is a business novel that explains how the theory of constraints can be applied to IT operations. The Phoenix Project describes the problems that almost every IT organisation faces, and then shows the practices (based on the Theory of Constraint, Lean and more) of how to solve these problems.

4 thoughts on “Theory of constraints”